Great Access From Tokyo! 7 Amazing Shrines and Temples in Ibaraki Japan has countless shrines and temples. Even lesser-known spots often have rich histories, intriguing traditions, and unique features. This article introduces seven magnificent shrines and temples in Ibaraki, located not far from Tokyo.

Ibaraki Prefecture, located in the greater Tokyo metropolitan area, is a region that has prospered since ancient times.

The Hitachi no Kuni Fudoki (*)―one of Japan’s oldest literary works―described Ibaraki as a kind of utopia or nirvana, blessed with its bounty from the sea and mountains.

During the Edo Period (1603-1868), it flourished as a region governed by the Mito Tokugawa family―one of the three clans belonging to the Tokugawa shogun’s family.

Here, in Ibaraki Prefecture, a lot of unique shrines and temples have remained since ancient times. In this article, we will feature seven that are representative.

We recommend taking a day trip from Tokyo or staying one night at your travel destination.

*Hitachi no Kuni Fudoki: an ancient report established in 721 on culture, geography, and oral tradition in the Hitachi Province (a region that covered much of present-day Ibaraki Prefecture). The Ushiku Daibutsu Buddha statue, located in Ibaraki’s Ushiku City, was completed in 1993 after ten years of construction work. It’s registered in the Guinness World Records as the world’s largest bronze Buddha statue!

The impressive statue stands 120 meters tall (100 meters high, 20 meters high from the base). It’s also three times taller than the Statue of Liberty in New York City. If you stand in front and look upward, it’s almost overwhelming.

Based on appearances alone, the Ushiku Daibutsu is a statue. But inside, it’s actually a temple. It serves as a facility for the Jodo Shinshu, a sect of Japanese Buddhism. 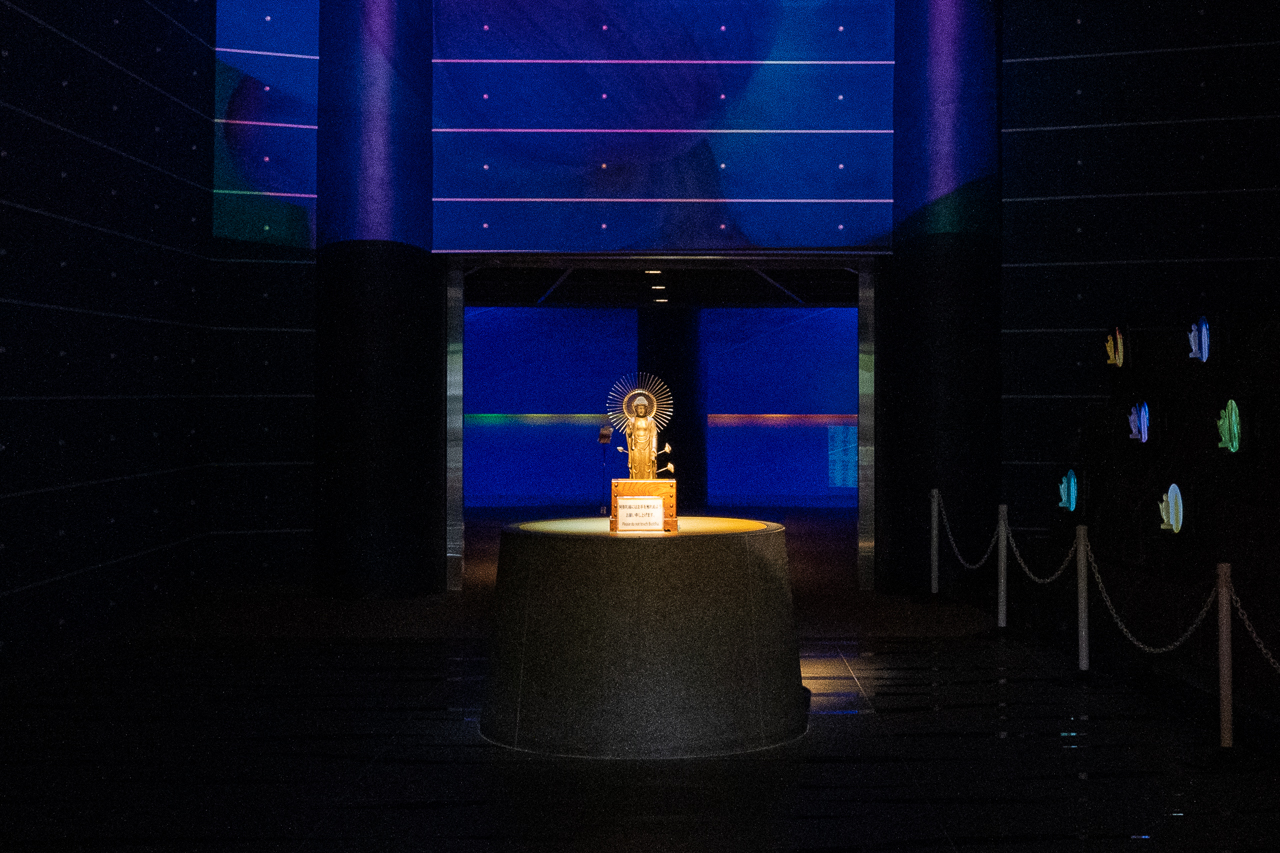 World of Infinite Light and Life

Once inside, you can see the “World of Infinite Light and Life,” a mystical representation of the Jodo Shinshu world. 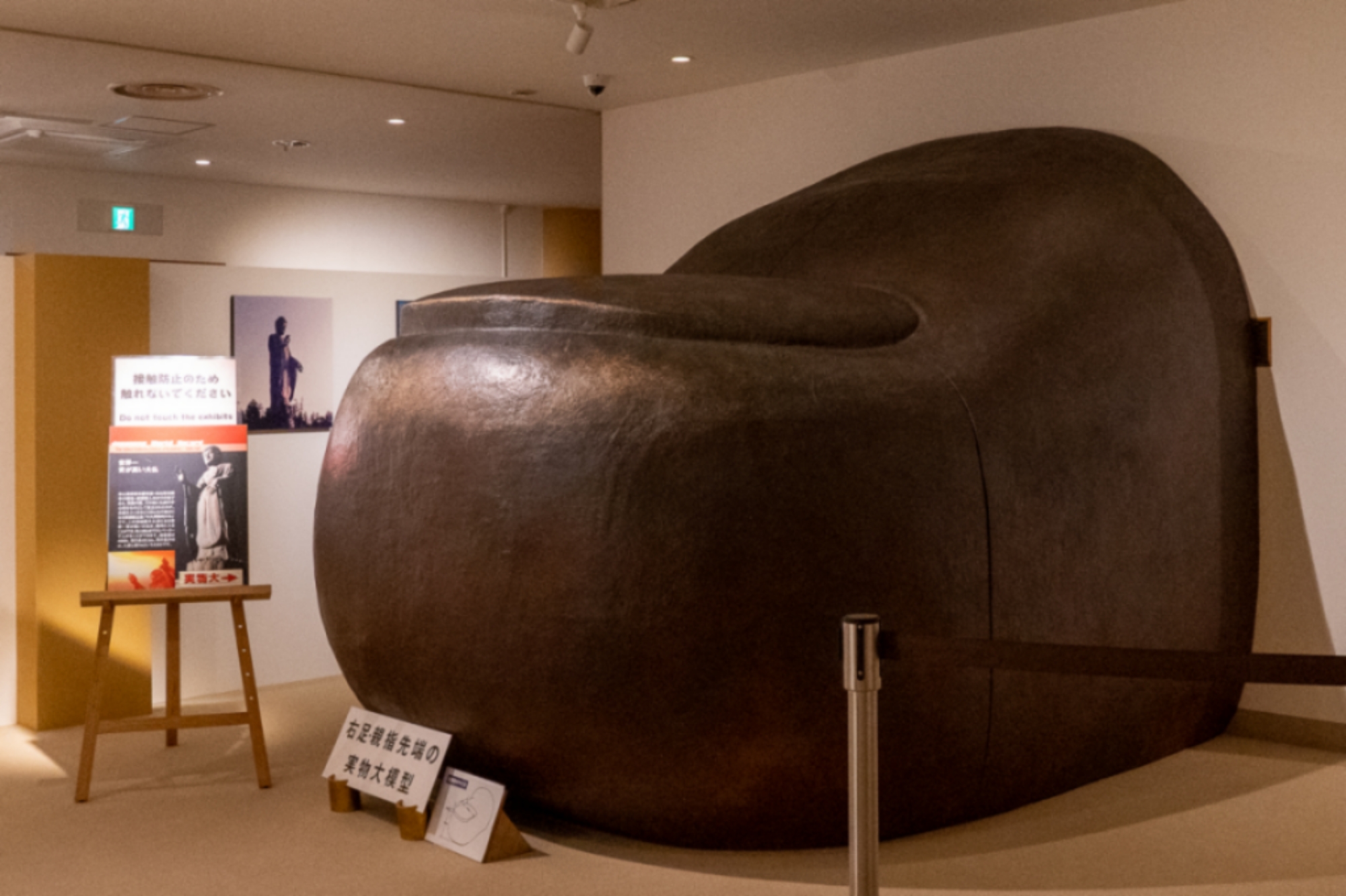 In addition, you don’t want to miss the Buddha statue’s big toe (boshi) or the display of 3,400 miniature samples of golden Buddha statues inside the Ushiku Daibutsu. Visitors can also try their hand at shakyo (*), and decorate the statue pedestal with some gold leaf! From the 85-meter-high observation deck you can enjoy a panoramic view of the Kanto Plains.

*Shakyo: Buddhist training in which one transcribes (traces over) a sacred scripture. It’s believed to help bring peace of mind to people’s everyday lives. Osugi Shrine is located in Ibaraki’s Inashiki City. This is the head shrine for some 670 Osugi Shrines located throughout Japan. In Japanese, “osugi” means large cedar tree. It refers to the sacred tree of the shrine.

It’s a shrine that honors Japan’s one and only Yume Musubi Daimyojin (*). This deity wards off evil and grants special favors and prayers, in addition to yaku-yoke, happo-yoke, hoshi-yoke, kubo-yoke (*), traffic safety, and so on. More than 500,000 people visit the shrine annually.

*Daimyojin: an honorific title for a great Shinto deity.
*Happo-yoke, Hoshi-yoke, and Kubo-yoke are names of the charms for worshippers to be protected from impending misfortune coming from many directions. They are believed to ward off any calamity and bad luck that tends to occur easily at certain ages during one’s life. 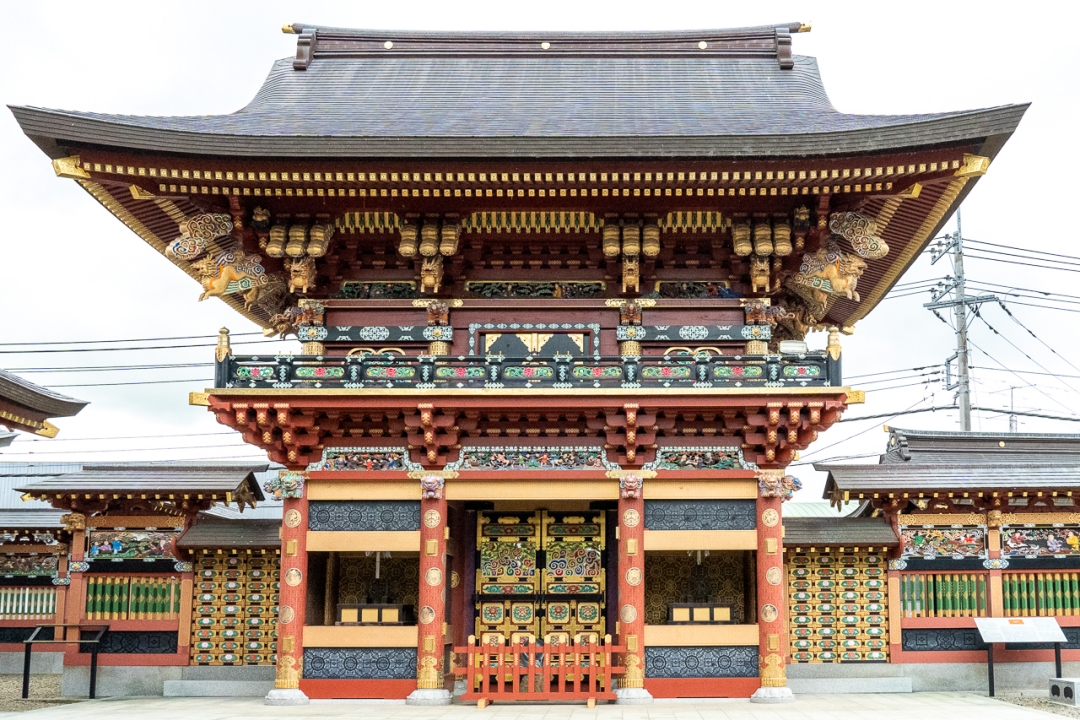 Since Osugi Shrine has bright and splendid decorations, it’s often referred to as Ibaraki’s Nikko Toshogu (*)―even featuring a similar architectural style. In fact, the shrine carpenters and roof thatchers who built Osugi Shrine’s Kiri-Mon Gate are the same craftspeople who worked on the Nikko Toshogu Shrine.

The Kiri-Mon Gate has suffered the misfortune of being destroyed by fire several times. It was newly rebuilt in 2010 for the first time in 280 years.

It’s decorated with intricate carvings, starting with spiritual beasts such as the kirin, dragon, lion, and tapir (*). This gate’s magnificent architecture features an opulence that rivals the shrine’s main hall.

*Nikko Toshogu: a shrine that enshrines Tokugawa Ieyasu (1543-1616), the founder and first shogun of the Tokugawa Shogunate that ruled Japan from the early 17th century until the middle of the 19th century. It’s famous for its gorgeous, spectacular architecture.
*Kirin (unicorn-like mythical creature), dragons, lions, and tapirs are legendary animals found in Chinese mythology. 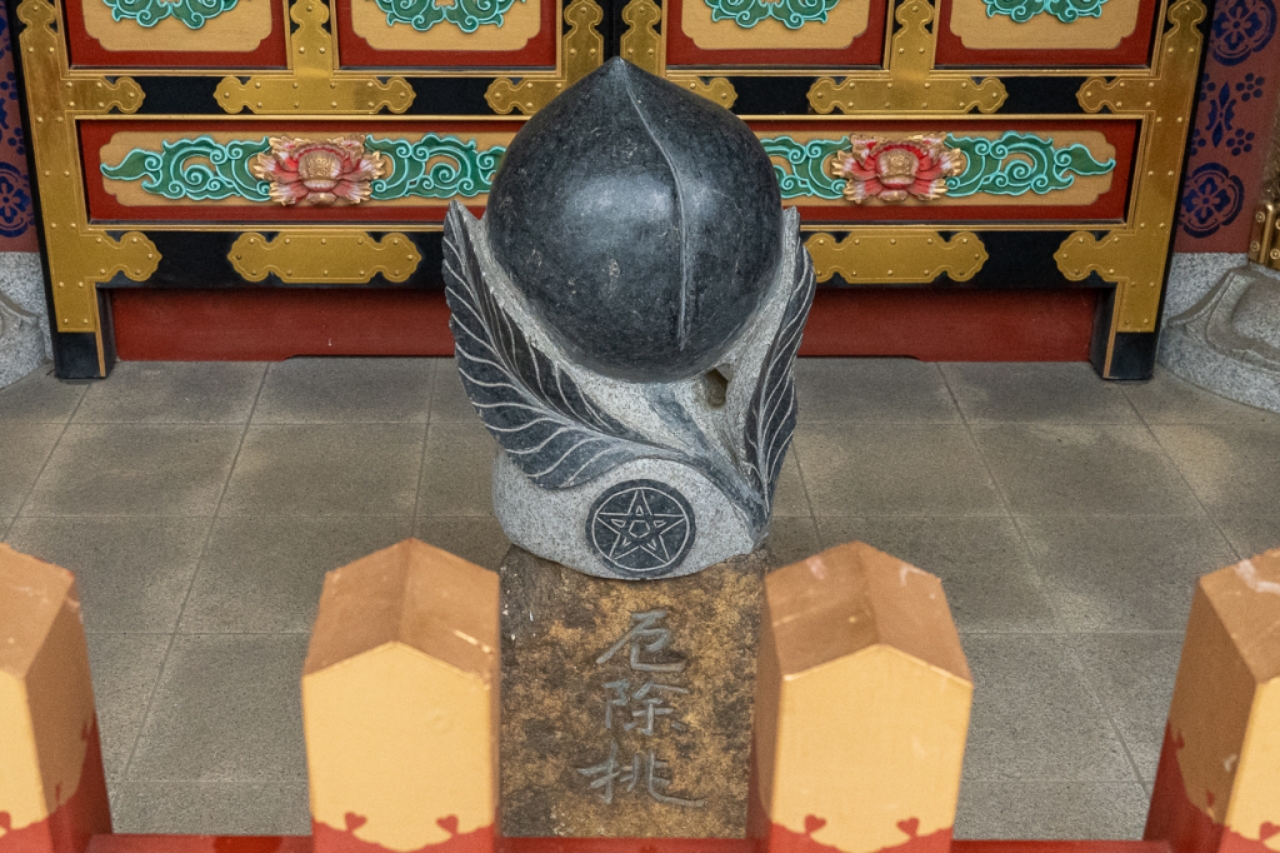 On the shrine precincts, you’ll find a stone peach statue (nade momo). It’s been said that you can ward off evil and be protected against misfortune by rubbing the figure.

There are typically several other shrines on the grounds of a Japanese shrine. It’s common for visitors to worship multiple deities. On the precincts of Osugi Shrine, there is a hall called Kachiuma Shrine alongside the main prayer hall. In the Japanese language, Kachiuma means “katsu (win)” and “uma (horse).” So the shrine has become a kind of mecca for horse racing fans! 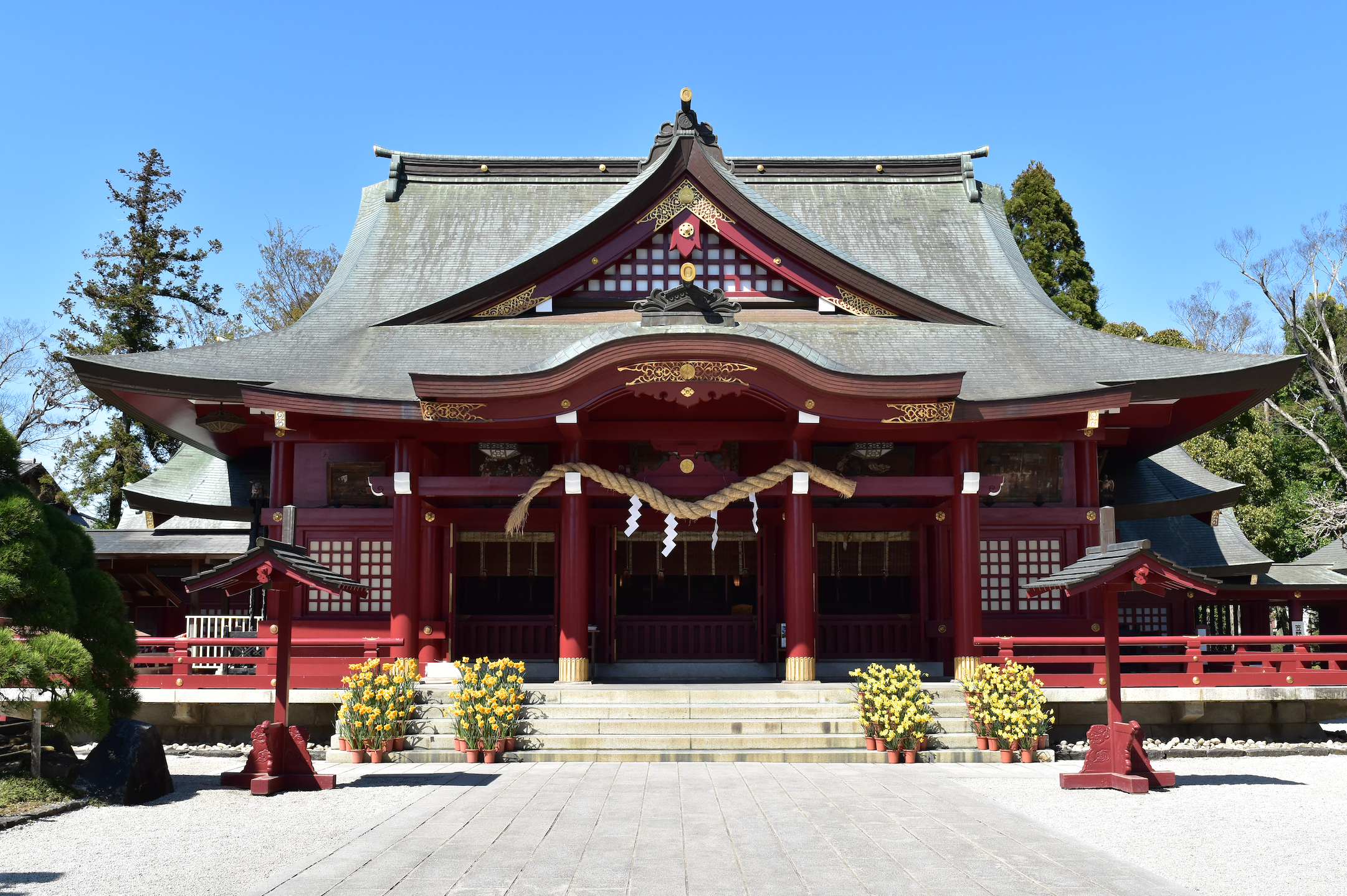 Kasama Inari Shrine, located in Kasama, was established 1,370 years ago.

Inari Okami, the god of agriculture, is one of the gods that the Japanese feel most close to. As one of Japan’s three largest Inari shrines, Kasama Inari Shrine is visited annually by more than 350,000 worshippers. 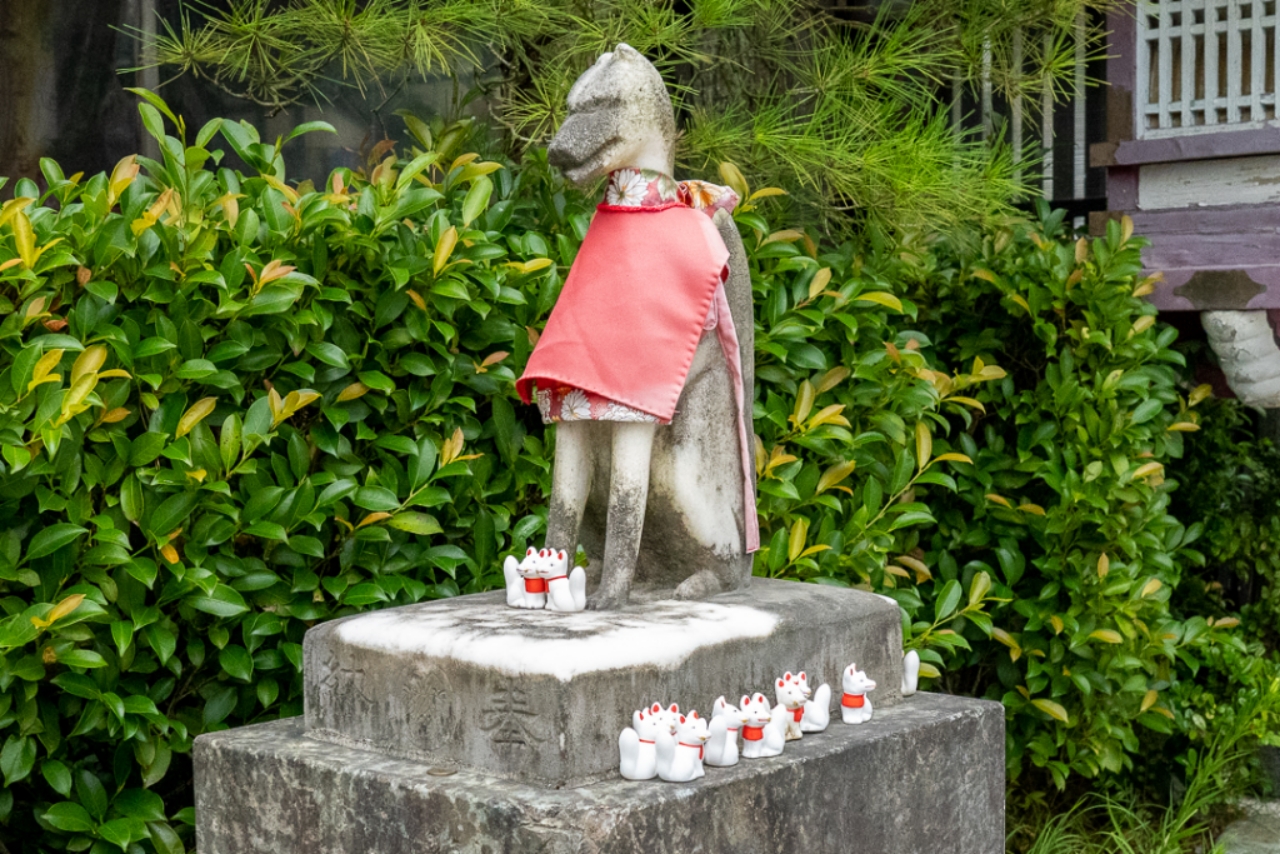 You’ll notice many stone fox statues on either side when you enter the approach leading to the shrine. This is to honor the foxes, which are respected as divine messengers.

Kasama Inari Shrine is also famous as a place to admire chrysanthemums because of the Kasama Chrysanthemum Festival held every autumn.

On the shrine precincts, the chozuya (*) or water basin has been transformed into a hanachozu (flower water basin). The flower art, including many chrysanthemums, can be seen floating on the surface of the water, creating a beautiful eye-catching sight!

*Chozuya: a water basin to purify one’s hands (cleansing body and soul) before entering a shrine or temple. 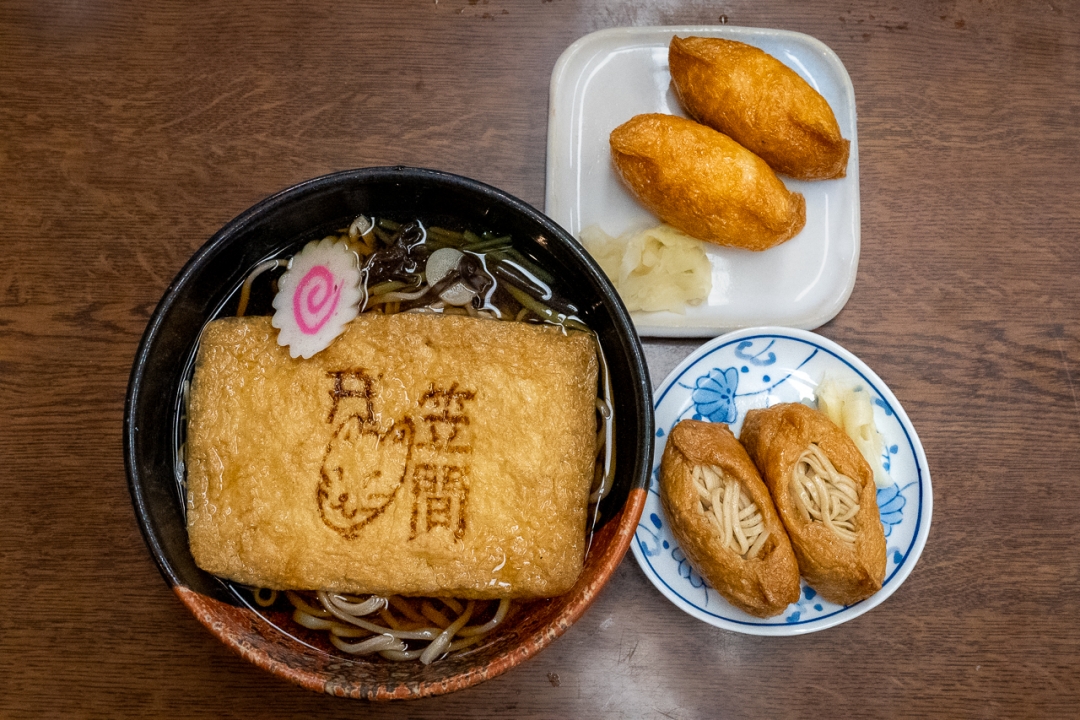 You can also try Kasama’s specialty, the inarizushi (*), near Kasama Inari Shrine. This is something that shrine worshippers are always on the lookout for. The soba noodles, filled with a piece of abura-age (fried tofu) etched with the image of a cute fox, are also popular (see photo above). When you pass under the torii gate at Sakatsura Isosaki Shrine, both sides of the approach are lined with tabunoki trees―some over 300 years old. These trees are designated as a remarkable natural monument by the prefecture, forming an impressive canopy-like tunnel in the forest (see the above photo). A torii gate frames the view of the ocean.

A stunning ocean view awaits beyond the torii gate. This spectacular view accentuates the majestic atmosphere of Sakatsura Isosaki Shrine. 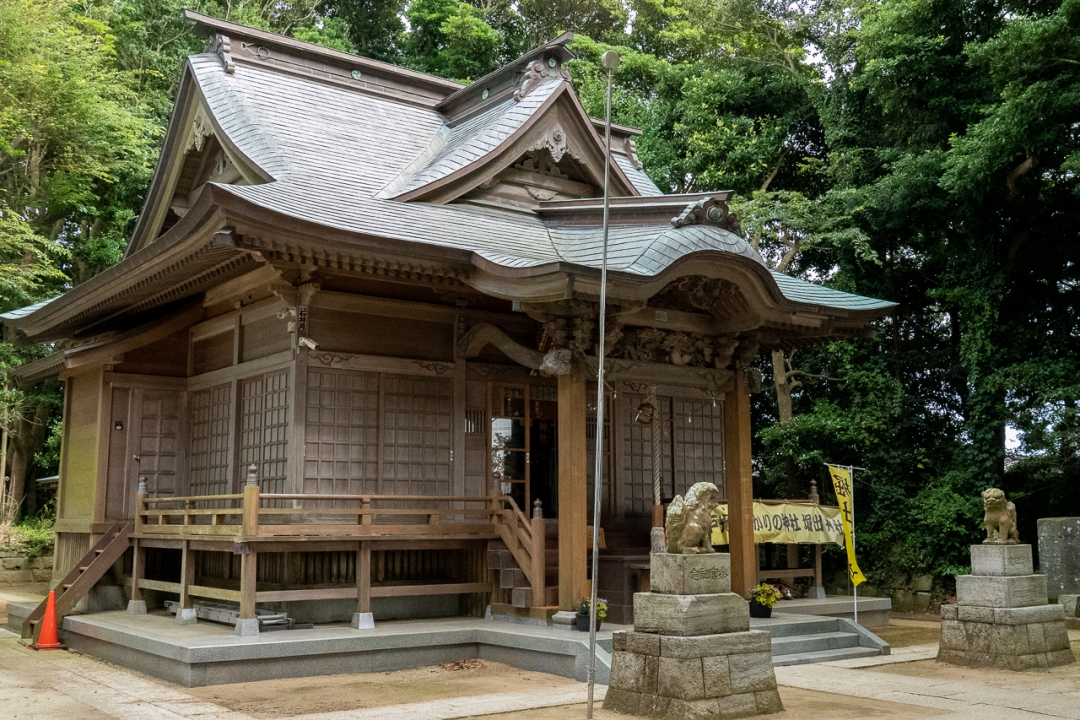 Horide Shrine was established in 1663. In Japanese, “horide” means to excavate and dig up.

Tokugawa Mitsukuni, the ruling daimyo at the time, unearthed a mirror that became an object of worship. Hence the shrine was given the name “Horide.” Yahata-no-Kami, the deity of learning and warding off evil, is enshrined here. In 2019, Hoshiimo Shrine was built on the precincts of Horide Shrine.

Ibaraki Prefecture is Japan’s top producer of hoshi-imo (dried sweet potatoes). In Japanese, hoshi-imo sounds similar to “hoshimono” (things that one wants). As a result, Hoshiimo Shrine has become a spot where worshippers pray to receive the divine virtues they desire.

The shrine crest features a star design. If you look closely, the center part of the star looks like it’s been scratched, resembling the surface of a dried sweet potato. The torii gates are a brightly vivid gold color. The famous graphic designer Taku Sato created the design. Mt. Oiwa is a sacred mountain believed to be a place where deities have dwelled since ancient times.

Oiwa Shrine dates back over 1,300 years and is even mentioned in the “Hitachi no Kuni Fudoki,” one of Japan’s oldest literary texts. During the Edo Period, lords of the ruling Mito Clan came to pray here.

During the Nara Period (710-794), after Buddhism was introduced in Japan, a belief system called “Shinbutsu Shugo” became commonplace. This was a synthesis of Shinto and Buddhism. However, during the Meiji Period (1868-1912), the government made a distinction between the two and began separating the religions. Shrines and temples became detached structures.

However, one can still feel the history of Shinbutsu Shugo due to the Buddhist statues located in the precincts of Oiwa Shrine. 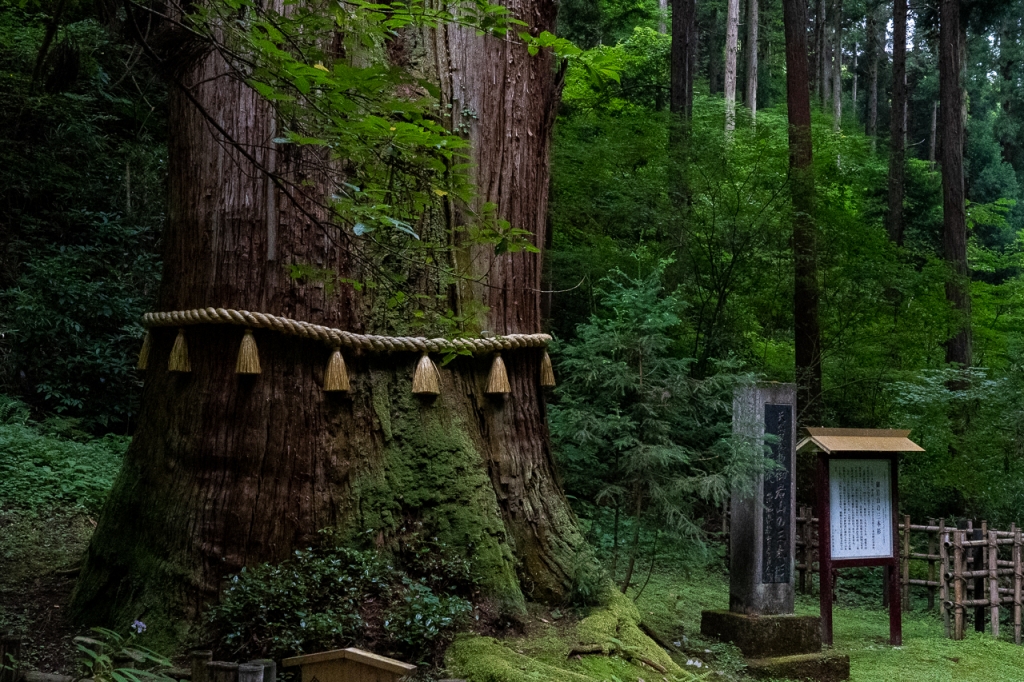 A sacred tree called the “Sanbonsugi.” Three giant cedar trees reach up toward the sky from the same trunk.

As you proceed along the shrine approach with its thick greenery, you’ll see the Romon Gate (two-storied gate). Next to it is the grove of cedar trees. The view of the gate and the 50-meter-tall, 600-year-old sacred cedar trees (Sanbonsugi) is breathtaking.

There’s another shrine on the same grounds called Sai Shrine. The ceiling is decorated with powerful and spectacular picture of dragon god. Near the shrine’s main hall, there are two paths where visitors can reach the summit of Mt. Oiwa. 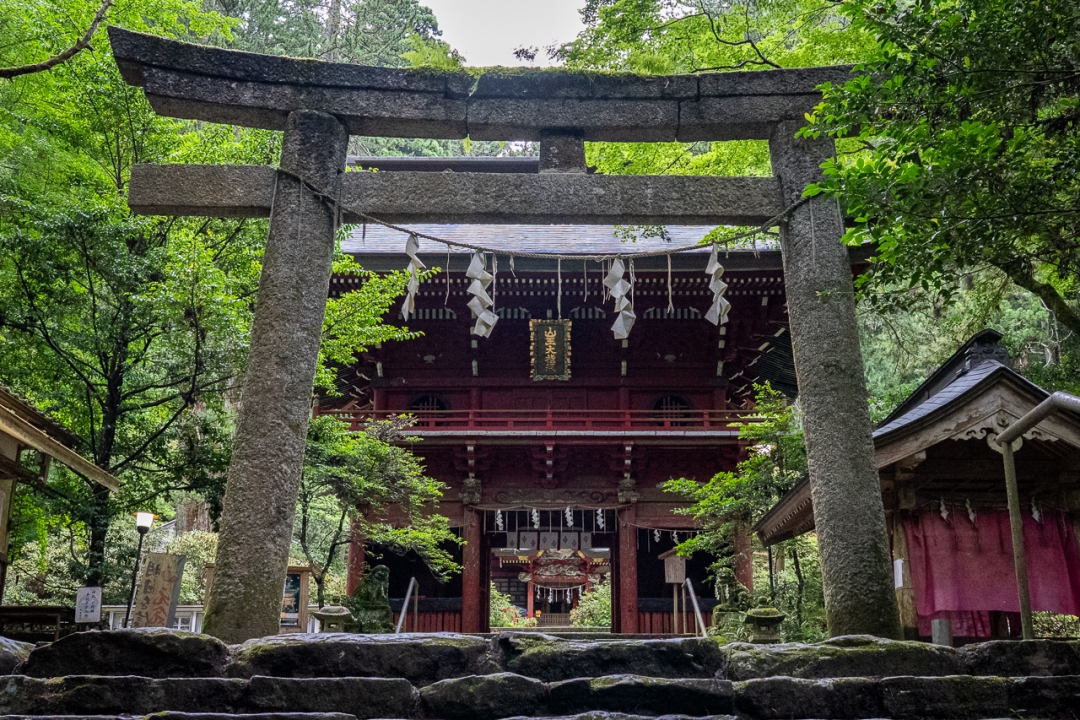 Hanazono Shrine is located near Kitaibaraki’s scenic Hanazono Gorge. The shrine has a narrow winding approach and is surrounded by beautiful nature.

*Tamuramaro Sakanoue: a military commander of the Yamato Court. He is said to have defeated the “barbaric people” residing in the Tohoku region (northern Japan).
*Sanno Daigongen: the guardian deity of Shinbutsu Shugo, under which Shinto and Buddhism joined under a single belief system. On the grounds of the shrine, you can feel traces of the Shinbutsu Shugo era. The vermillion-colored buildings also harmonize with the surrounding greenery. In addition, the tranquil atmosphere exudes a feeling of splendor. 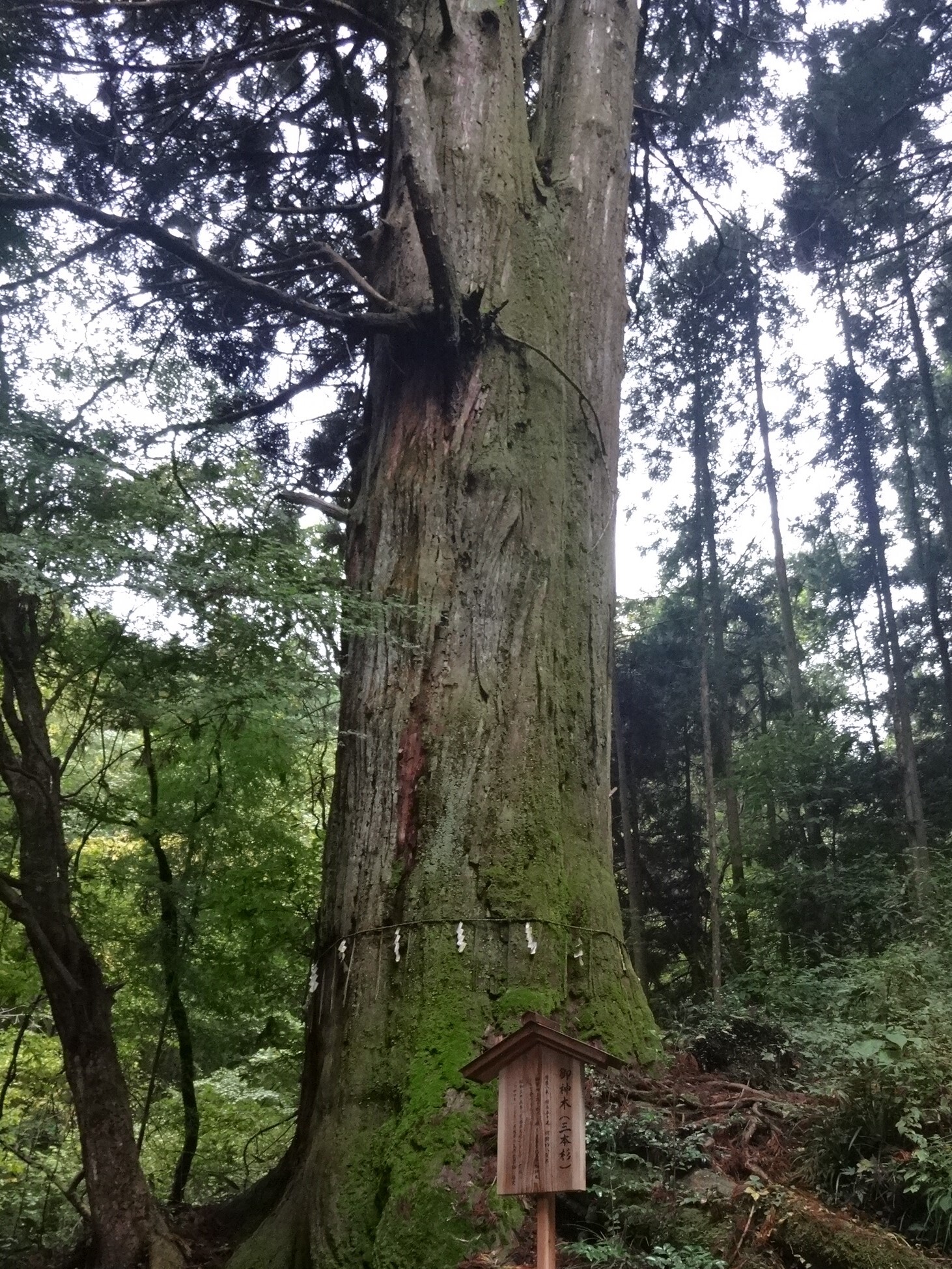 Large cedar trees surround the grounds of the shrine. This includes the 700-year-old sacred Sanbonsugi trees that allow visitors to feel the magnificence of the precincts.

Among the old cedar trees, there’s one with a large protruding bump. It resembles the figure of a fully pregnant mother, garnering fame as the “pregnant cedar tree.” Visitors from all parts of Japan come here to pray for safe childbirth.

Shrines and temples are the cornerstone of religious faith for many Japanese people. When visiting a shrine or temple, you can experience Japan’s rich history and culture and receive spiritual energy.

If you’re visiting Ibaraki, please head to some shrines and temples famous for their long-standing history. 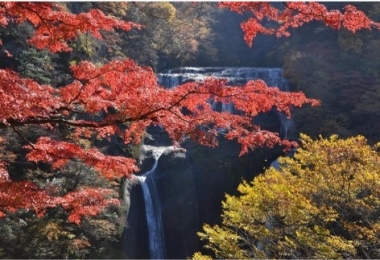 Ibaraki Prefecture is located near Tokyo and boasts incredible scenery and delicious food. September to November is the autumn season in Ibaraki, which means that it's the best time to visit for foliage and seasonal specialties. The following is a list of nine things to enjoy if you visit Ibaraki in autumn. Brewery Visits and Tastings Near Tokyo! 6 Sake Breweries in Ibaraki

In recent years, Japanese sake has grown popular overseas. Ibaraki Prefecture boasts many breweries that can be easily reached from Tokyo. The following is a list of six breweries that provide tours of their facilities and are accessible using public transportation.