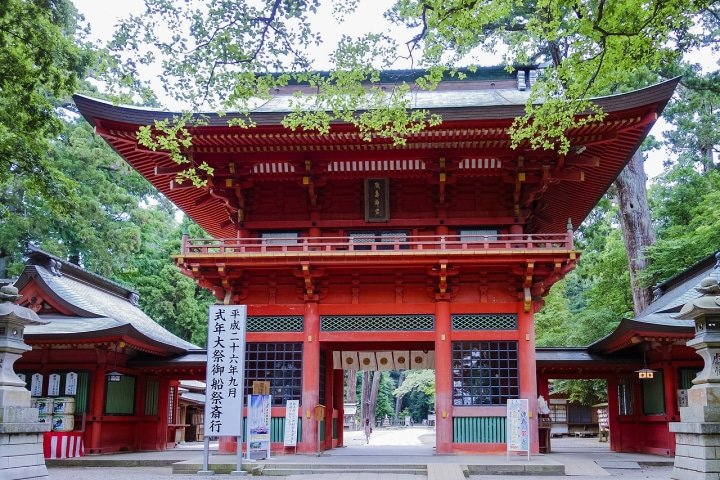 Ibaraki Prefecture boasts many historical landmarks, including places closely related to the Tokugawa family who ruled Japan during the Edo Period (1603-1868). We introduce locations such as the Mito Castle Remains and Kodokan where visitors can experience the atmosphere of the past. 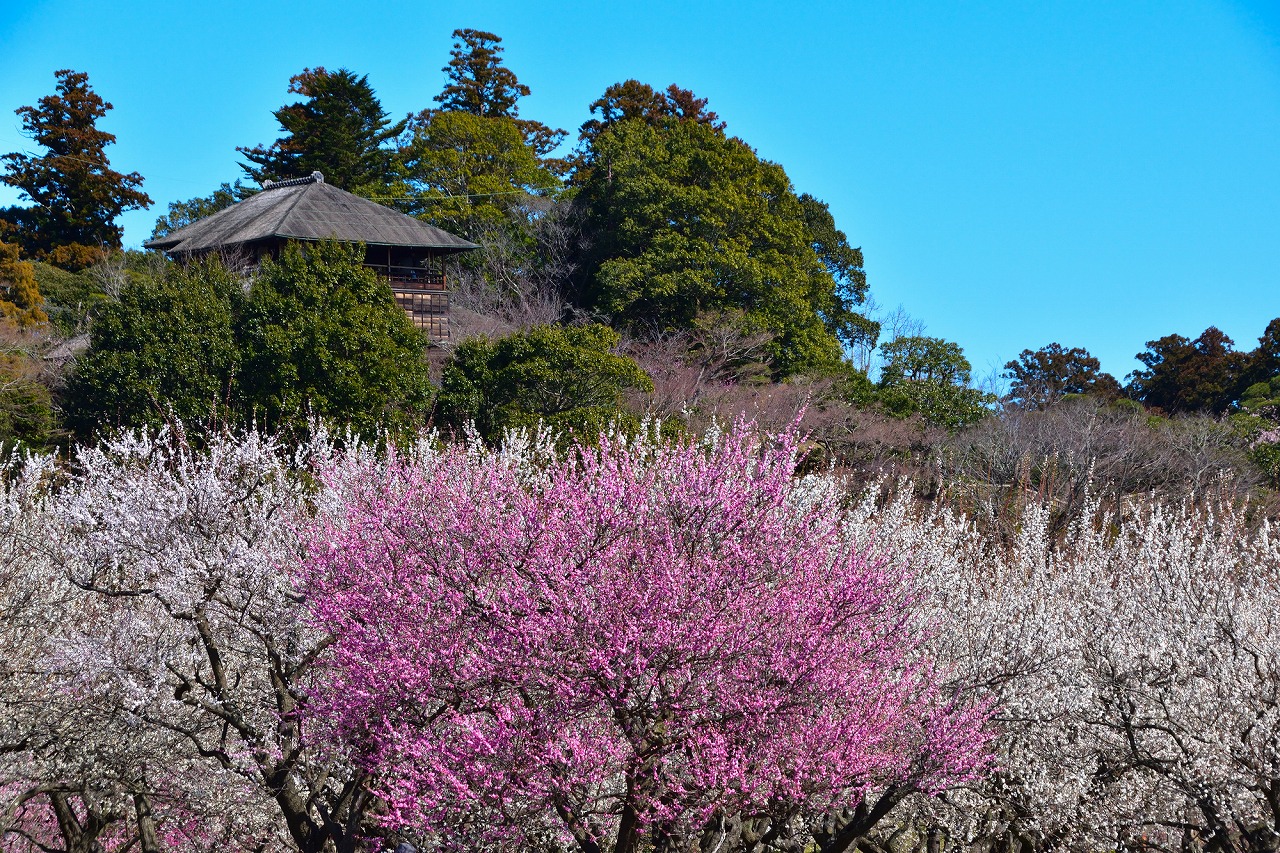 Japanese culture as we know it today was established in its most part during the Edo Period (1603 – 1868). Tokugawa Ieyasu (1543 – 1616), conqueror of the civil war, founded the Tokugawa shogunate, and lead the other feudal lords in politics. His achievements brought on more than 250 years of peace, which lead to economical and cultural developments.

The Tokugawa clan and the Edo shogunate played a decisive role in Japanese history. Those who are interested in history, especially the Edo Period, should visit the historic landmarks in Ibaraki Prefecture. Mito City, capital of the prefecture, was ruled by the Mito clan, which was part of the Tokugawa family. Visitors can find the remains of a castle and former schools founded for the samurai class.

This article introduces seven destinations where you can gain knowledge about samurai culture and the Edo period, which stands at the roots of modern Japan. 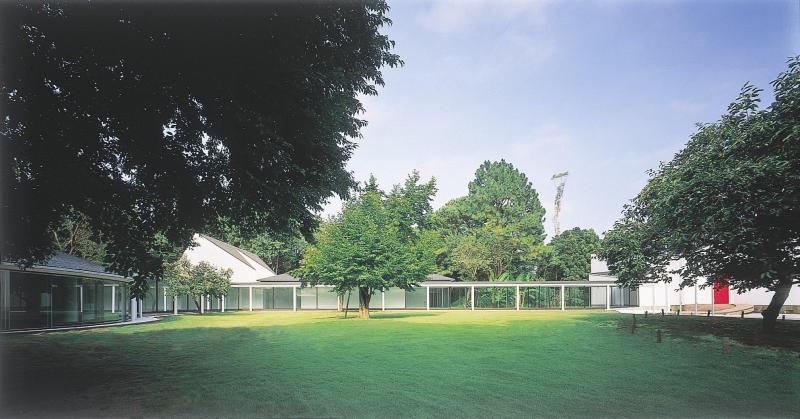 The Tokugawa Museum displays items that were owned by Ieyasu, along with approximately 30,000 relics inherited by the Tokugawa family. The displays consist of clothes, tea ceremony utensils, old documents, and artwork. They hold insights into the lifestyles of the Tokugawa family throughout the ages.

If you wish to learn more about the most powerful family in the Edo Period, do visit this museum. 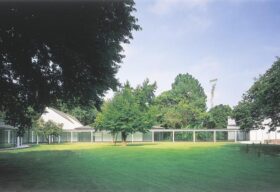 The Tokugawa Museum was established in 1977 by the Public Interest Incorporated Foundation to house objects and writings passed down from the Mito Tokugawa Family. The exhibits were donated by Kuniyuki Tokugawa, the 13th Lord of the Mito Domain.
Approximately 30,000 items in the collection are associated with Tokugawa Ieyasu (Japan’s first shogun), his son Yorifusa Tokugawa, and their families.
The museum also carries the manuscript of "The Great History of Japan" (Dai Nihon-shi) and around 30,000 historical documents used to write the book.
The Tokugawa Museum is the only facility in Japan to house such an extensive collection of materials and objects relating to the lives of Japan’s daimyo (feudal lords. It's well worth a visit if you’d like to discover more about this period in Japan’s history.
Photo courtesy of the Tokugawa Museum

Mito Castle was erected on the foundations of a former structure that had been built between the late Heian Period (794 – 1185) and the early Kamakura Period (1185 – 1333). When the Mito clan was founded in 1609, the castle became the residence of the Mito Tokugawa family. 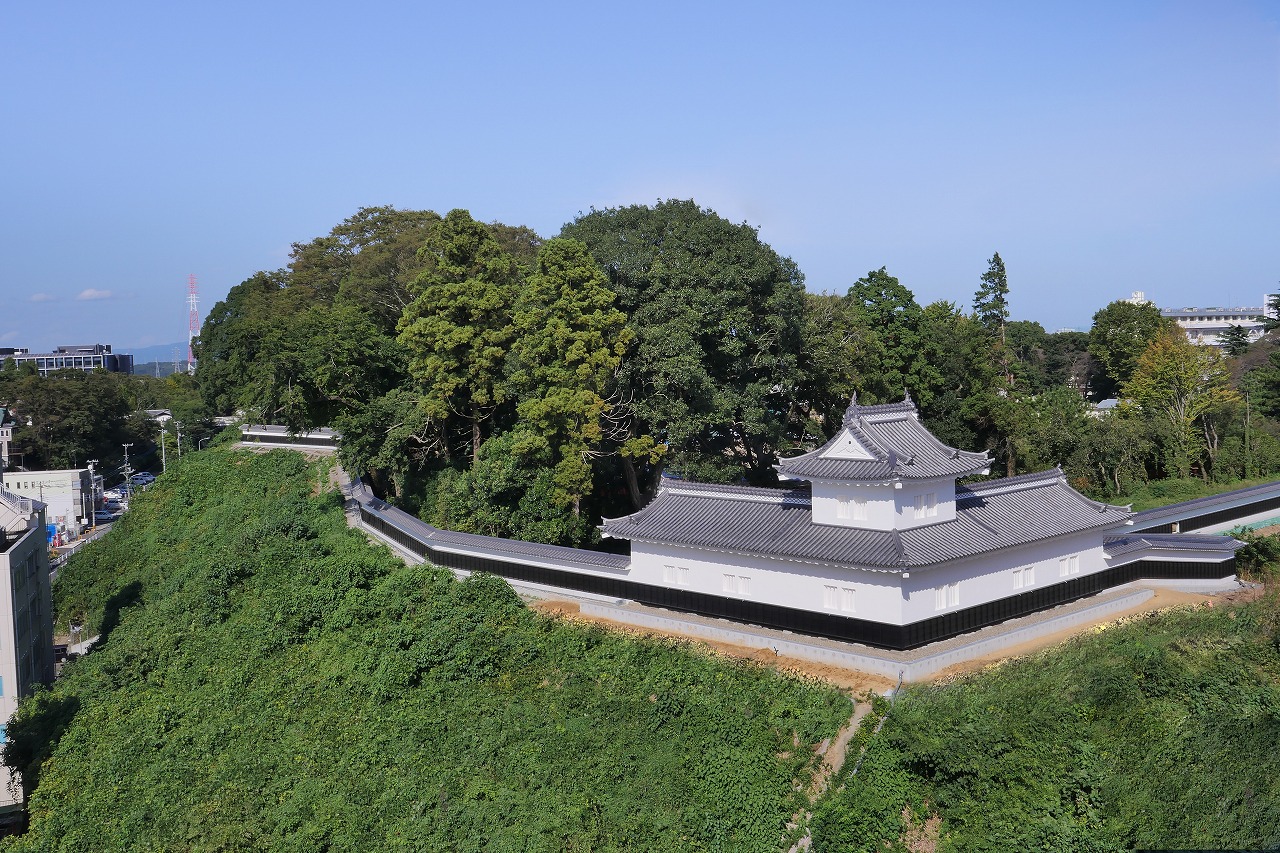 The yagura (tower) of the castle burnt down during the war in 1945. The remains include bulwarks and moats, which have not changed much since its construction, Kodokan, a school for the clan members located within the Sannomaru area, and the Yakuimon Gate. The Otemon (main gate) and the second tower were reconstructed based on historical records. 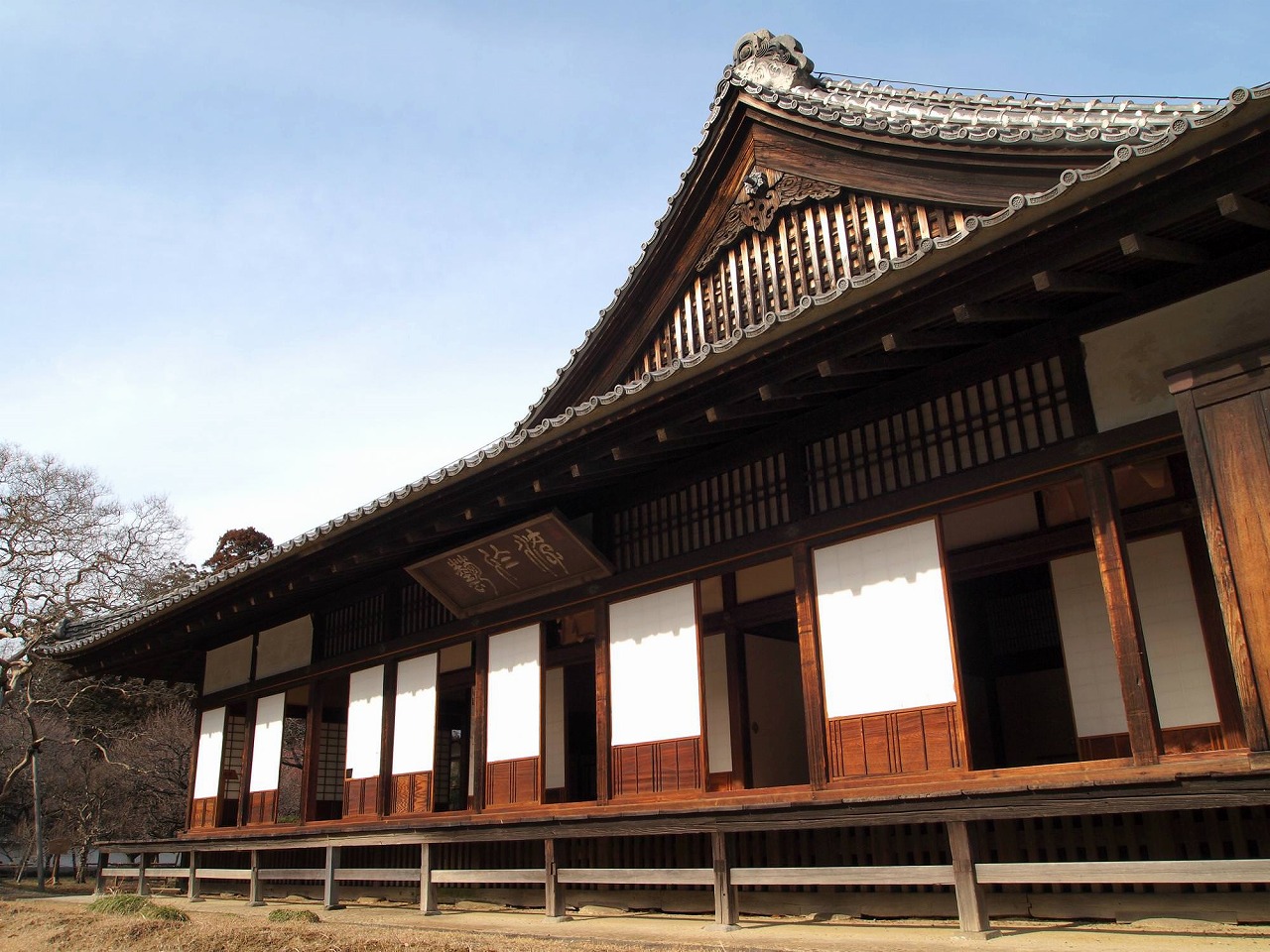 Don’t forget to visit Kodokan, located in the Sannomaru area of the Mito Castle Ruins. An educational institution founded in 1841 by Tokugawa Nariaki (1800 – 1860), the lord of the Mito clan, it was the largest facility of its kind in those days.

Foreign ships appeared at the shores of Japan, a closed country at the time, and demanded that the nation opens its gates. Nariaki believed that education was essential in keeping Japan independent, and built Kodokan.

The facility was like a university, offering various subjects such as history, medicine, astronomy, military strategy, and martial arts. Kodokan has been designated Japanese heritage. It is an excellent place to get a glimpse of the education of young samurai in the Edo Period. 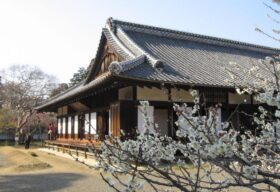 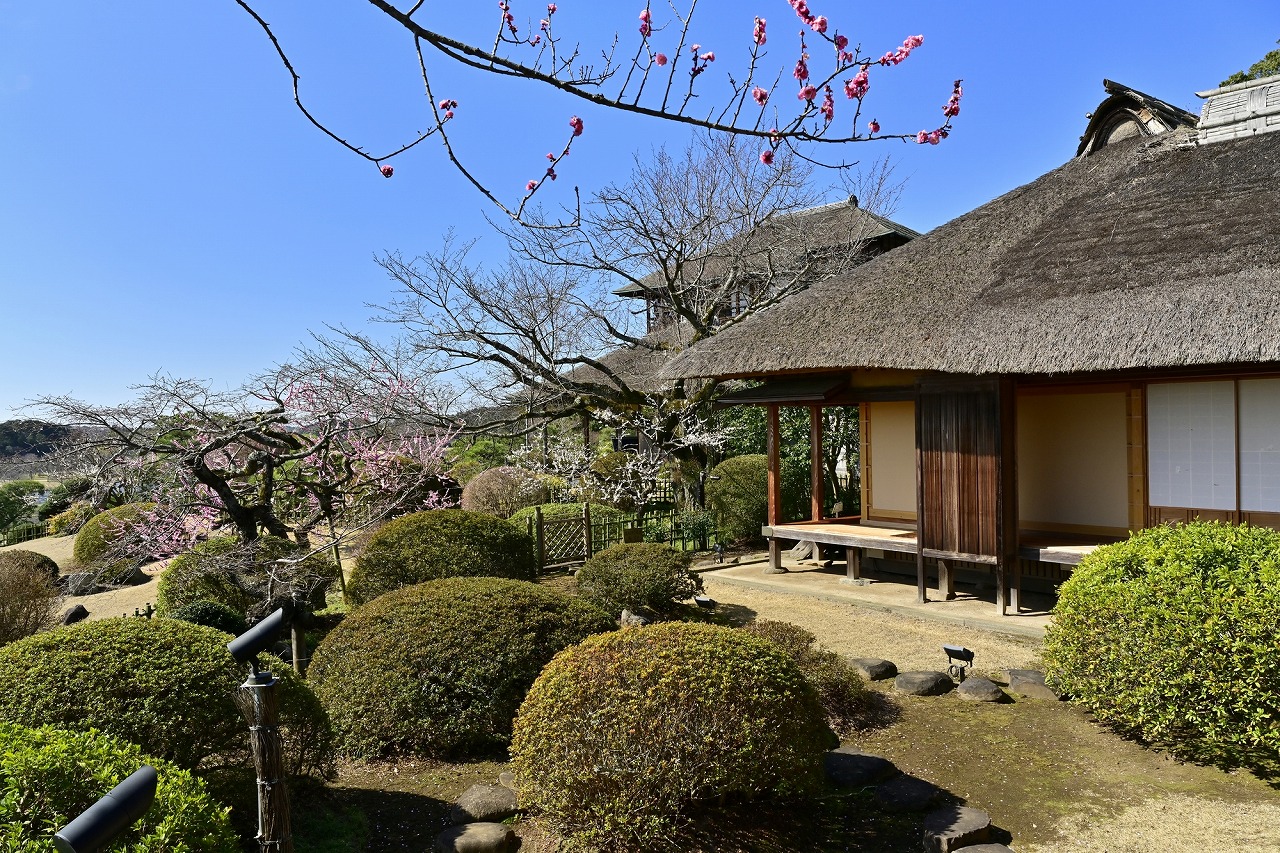 Kairakuen Garden, a scenic spot located in Mito, was also built by Tokugawa Nariaki. It was intended as a place where Kodokan students could enjoy a break during their studies.

The building inside the garden was named Kobuntei. While the meaning of “kobun” is “to prefer studying,” it is also a byname of plum blossoms. In China, plum trees were adored not only for their flowers but also because their fruit was edible and had high nutritional value. That is the reason why Nariaki encouraged planting plum trees. 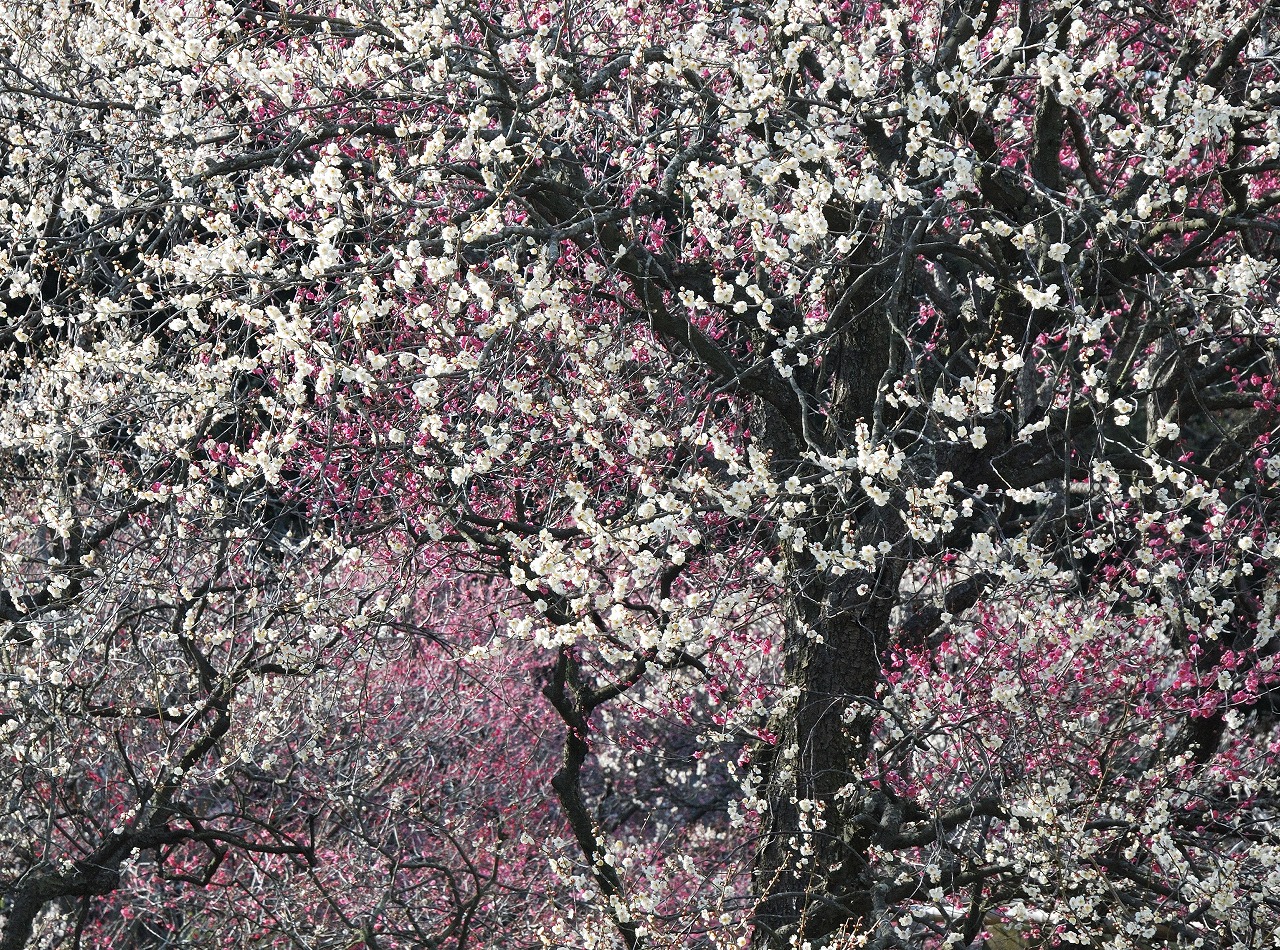 Kairakuen has become a famous spot for viewing plum blossoms. It is one of the three great gardens of Japan, along with Kenrokuen in Kanazawa and Korakuen in Okayama. A plum festival is held in Mito when the flowers bloom in early spring, from mid-February to mid-March.

Nariaki welcomed guests and also held parties at Kobuntei. Additionally, there is a room on the third floor which offers a splendid view of the city. From both historical and cultural perspectives, this is a fascinating facility. 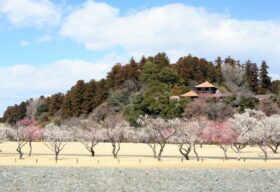 Kairakuen Garden is ranked among Japan’s top three most beautiful gardens, alongside Kenrokuen in Kanazawa and Korakuen in Okayama. The garden was established in 1842 by Nariaki Tokugawa, the ninth feudal lord of the Mito Domain. It has since served as a place of relaxation and recreation for the public.
Kairakuen is famous for its Plum Blossom Festival (Ume Matsuri) held from late February to early March. It is home to around 3,000 plum trees from 100 different varieties. Cherry blossoms and azalea in the spring and Japanese bush clovers in autumn keep Kairakuen looking beautiful year-round.
Website: https://ibaraki-kairakuen.jp/en/language/ 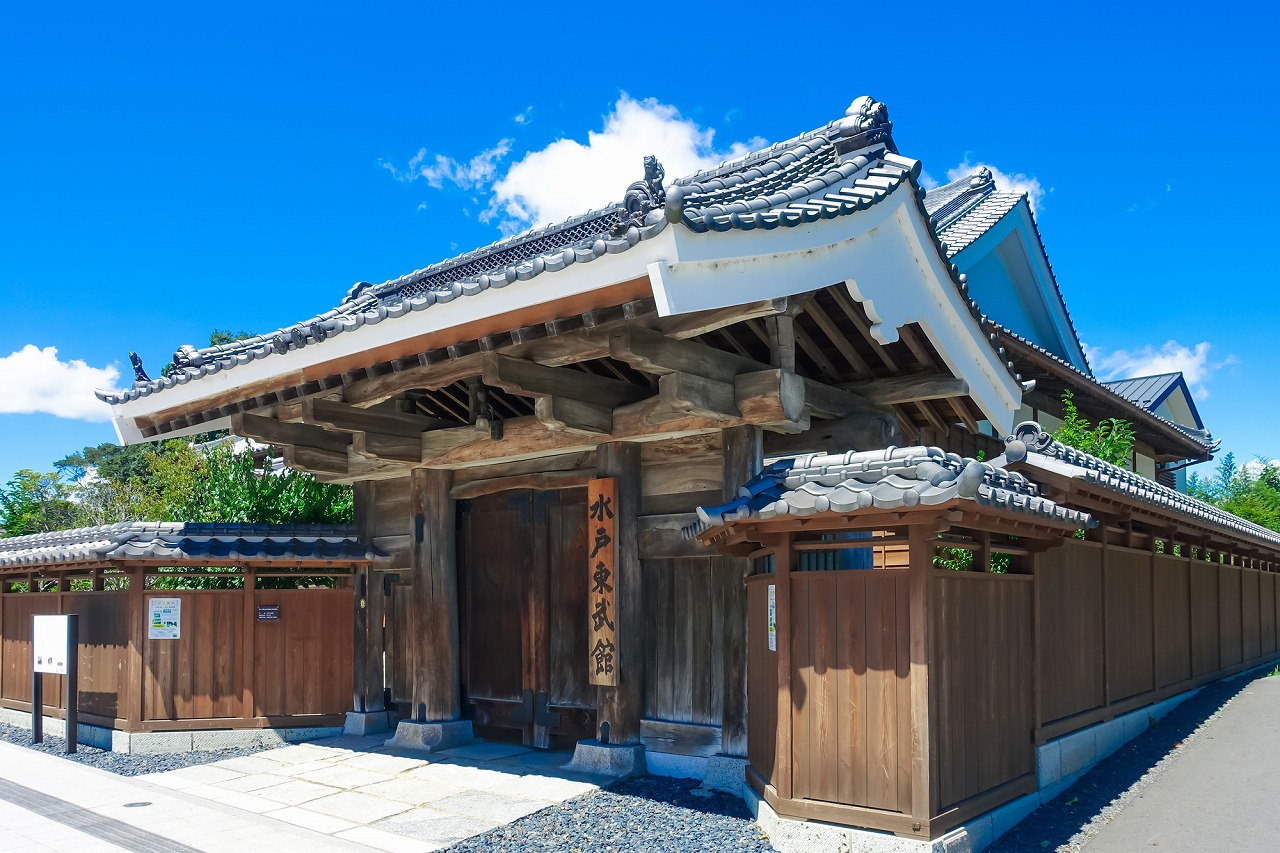 The motto of Kodokan was “bunbu fuki,” which means that both academic endeavors and martial arts are important. Mito Tobukan was founded in 1876, to inherit the martial arts side of Kodokan.

This facility still offers lessons in traditional Japanese martial arts such as kendo, naginata, and iaido. Hokushin Ittoryu, a school of swordsmanship founded by Chiba Shusaku, a legendary swordsman, is also taught at the dojo (training hall), as Nariaki invited Chiba to teach at Kodokan.

Visitors can experience martial arts at Tobukan. Those who are interested in the arts mentioned above should inquire at the Mito Tourism and Convention Association regarding workshops and experiences. 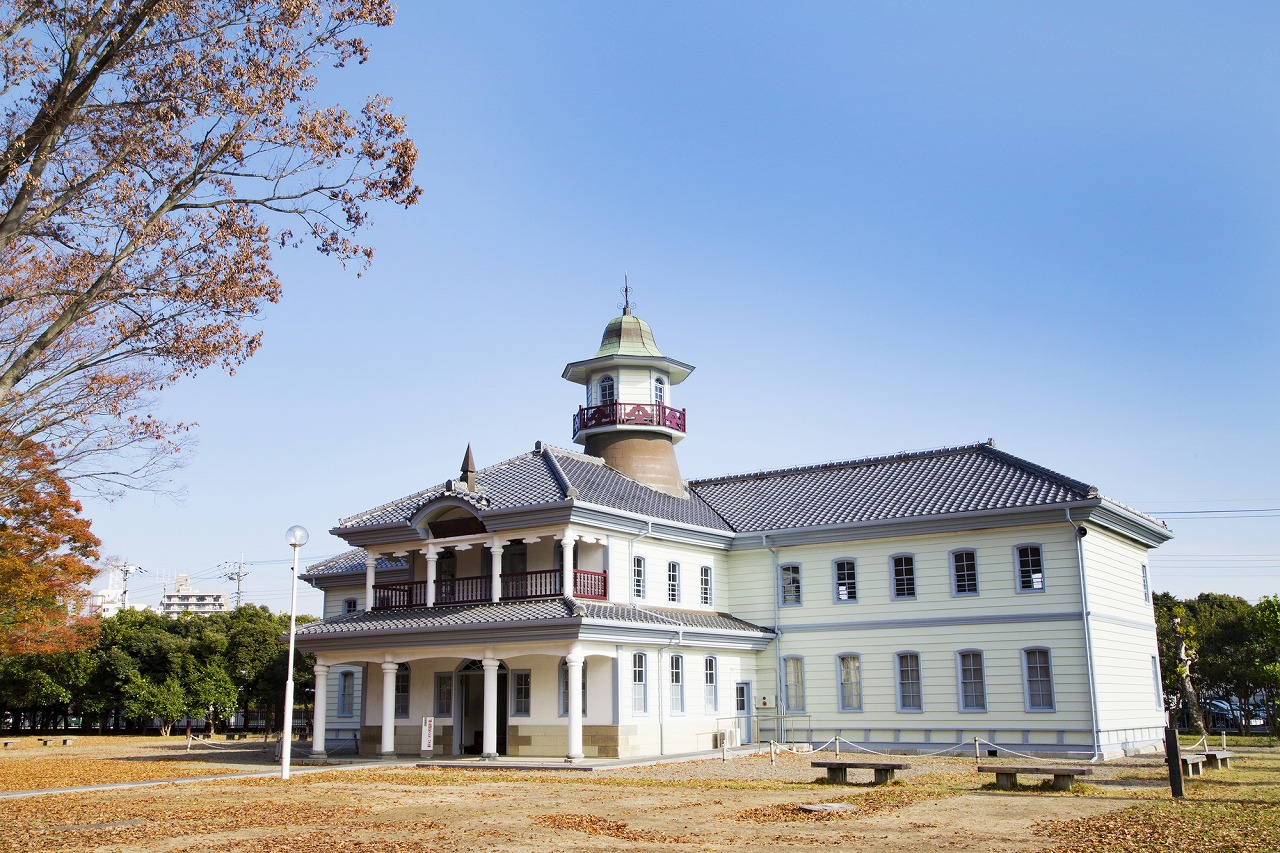 With the Meiji Restoration of the latter half of the 19th century, the Edo Period came to an end, and Japan embarked on modernization by opening its gates. As the new era demanded new educational institutions, many wooden, two-storied schools were built all over Japan.

One such school was constructed in Mitsukaido (currently Joso City), which prospered as a port in waterway transportation. The Former Mitsukaido Elementary School Main Building has been moved and reconstructed in Mito, and is now located on the grounds of the Ibaraki Prefectural History Museum.

The school displays materials related to the educational system in the Meiji Period (1868-1912), such as desks and writing utensils used by children, class schedules, and even menus of the school lunch program. It might be fun to check the educational system of the Edo Period at Kodokan, and compare it to the modern system that can be seen at the Former Mitsukaido Elementary School. 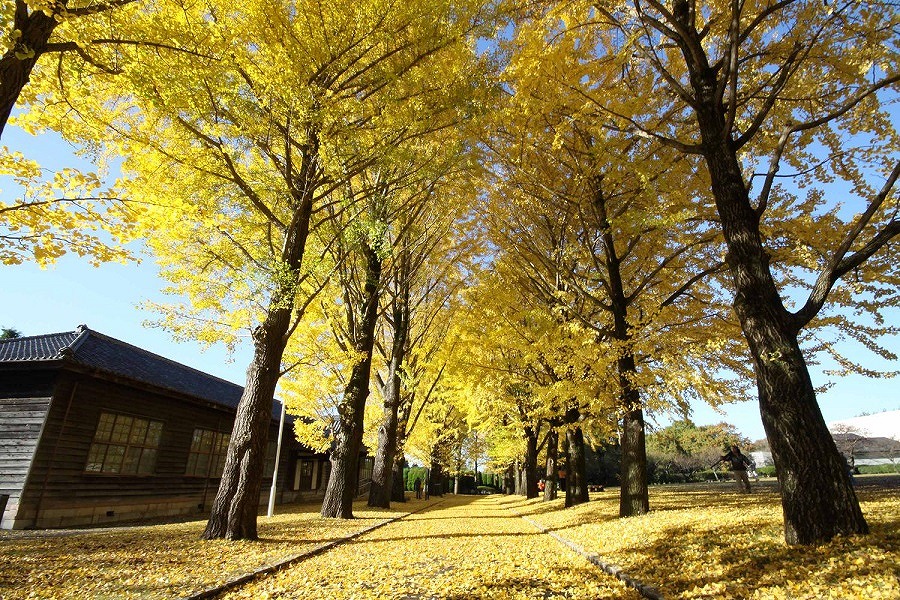 The Ibaraki Prefectural History Museum displays materials related to Japanese history since prehistory. It is also known as a fall foliage viewing spot famous for the row of ginkgo trees located in front of the Former Mitsukaido Elementary School.

There are special illuminations during the fall season, so those who are planning to visit in November should check the schedule in advance. 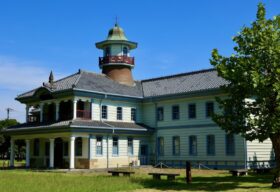 The Ibaraki Prefectural Archives and Museum (Mito City) was established in 1974. Permanent exhibits showcase the history of Ibaraki from ancient times to the present day. The museum itself is housed on a plot spanning 72,000m2. This formerly was a residence during the Edo Period (1603–1868) and later a Western-style school building from the Meiji Period (1868–1912).
During autumn, the museum grounds are fantastic to see bright yellow ginkgo trees, a seasonal highlight in Japan.

Kashima Jingu Shrine, located in Kashima City, is one of the oldest shrines in Japan and is dedicated to Takemikazuchi-no-kami, the deity of martial arts.

Besides revering Takemikazuchi, the shrine also owns a straight sword forged 1,300 years ago and designated as a national treasure. The sword is stored in the shrine’s treasure house, which is currently closed. In other words, Kashima Jingu has strong ties to martial arts. The shrine site is vast, with many buildings along the approach from the tower gate to the main sanctuary.

Near the sanctuary, visitors will find an area where deer live. Deer are considered messengers of the deities. It is said that the deer in Nara are descendants of the animals sent from Kashima Jingu to Kasuga Taisha Shrne. 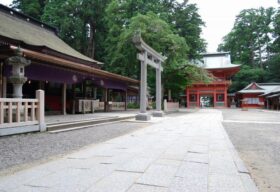 Kashima Jingu Grand Shrine is said to have been established in 660 BCE. It is the oldest and largest Shinto Shrine in the Kanto region. The shrine is dedicated to Takemikazuchi-no-Mikoto, the Shinto deity of martial arts.
The shrine is located in a spacious park. After visiting the shrine, stop off at the deer enclosure and see the crystal blue Mitarashi Pond. Stalls selling traditional Japanese snacks like dango dumplings and salt-baked sweetfish are available during peak seasons.
More than 80 annual events and festivals are held at the shrine, including the Ofune Matsuri or "Ship Festival," occurring once every 12 years and attracting visitors from across Japan and overseas.

Embark on a Historical Trip to Ibaraki!

By touring the historic spots in Ibaraki, visitors will be able to better understand the history of Japan. Visit the historical landmarks in Mito and Kashima, and enjoy a slip through time to the Edo Period, the era when the foundations of Japanese culture were established. 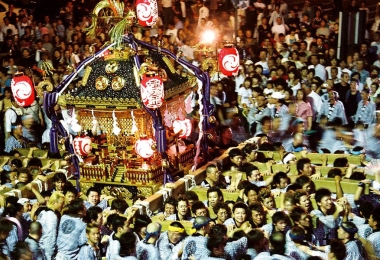 Summer festivals are a beloved annual tradition in Japan. Many unique and spectacular summer festivals steeped in history are found in Ibaraki, which is easily accessible from Tokyo. We have carefully selected five festivals that properly showcase the diversity of these yearly festivities. Many warehouse stores and traditional Japanese-style homes still remain in Ibaraki. If you love architecture and history, or want to see a nostalgic Japanese townscape, then there are several spots you'll be dying to visit. We introduce six places where you can experience the charms of Japanese architecture, including old and stunning structures in town, a cafe operating out of an old Japanese home, Japanese bars, a sauna, and more.